The blog has been silent this past week as I have been in Uganda and a part that had no Internet. In fact, there was no electricity at all as well as no running water. I was visiting an area called Amidakan near the village of Otuboi (north of the town of Soroti). I'll add a map to show where it is.

I had been invited to teach for a week in Kamidakan Baptist Bible School. The school was established by Peter Ayabu, a brother of Pastor William Eyika from Dagoretti Corner in Nairobi. (I travelled with William's wife, Grace and Ps Julius Orina.) Peter is also on the board of the Uganda Baptist Seminary (chairman). The Kamidakan Bible School currently going through the process of becoming as satellite campus of the UBS.

Staying in the village was an experience that I will never forget and neither will the locals. You see, only a few "muzungus" (white people) have ever visted there. Those that have have not stayed in the village but retreated each night to the town of Soroti. I was the 1st "muzungu" to actually sleep in the village for 6 nights. It caused a lot of talk!

Throughout the week I spoke with the students of the Bible School together with a gathering of local Pastors, some of whom teach in the school.

To say that I felt out inadequate is an understatement. But I constantly read and re-read "Ephesians 6:19 (NIV)
[19] Pray also for me, that whenever I speak, words may be given me so that I will fearlessly make known the mystery of the gospel."

During my preparations (I was given the requested topics 2 days before arriving in the village) I had not noticed that one Bible verse repeatedly appeared throughout the week - "2 Timothy 2:2 (NIV)
And the things you have heard me say in the presence of many witnesses entrust to reliable people who will also be qualified to teach others."
Definitely a fitting verse for a Bible School. Thank you God. You never fail.

One extra highlight of the week was meeting and hearing the local choir (see photo with instrument). I recorded a number of their songs and when I return to Australia I will create a CD to send back to them but also to sell as a fund raiser for the Kamidakan Bible School.

I also thank God to protecting me throughout the week both in travelling and while in Amidakan. The Australian government website (www.smarttraveller.gov.au) lists the area as "Do not travel". I never felt unsafe at any time! Thanks God. 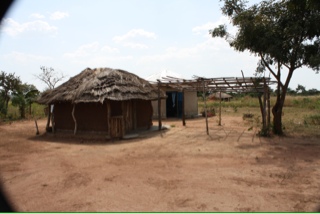 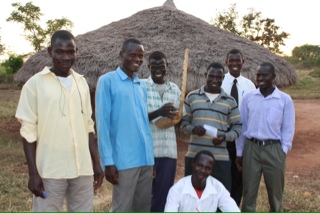 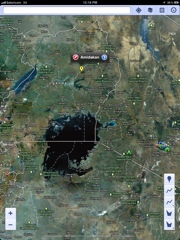 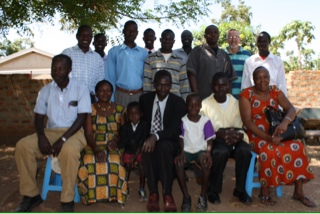 WOW!!!!
I love the vitality & genuineness of the church services here. I was welcomed back as one of the family (it's my 3rd trip to Dagoretti). I was greeted by a number of people by name which really made me feel at home. I was looking forward to hearing Ps William Eyika preach but there was a guest couple from Nigeria speaking. The wife spoke for about an hour with a lot of emotion and hype but although there were some good points in her sermon there was not a lot of depth. It was very much a prosperity gospel message.

The afternoon was spent relaxing back at the guest house ready for an early night as I'm being picked up at 6am tomorrow to catch a 7am bus to Uganda.

The week in Uganda will be full of surprises & new experiences.

Ephesians 6:19 (NIV)
"Pray also for me, that whenever I speak, words may be given me so that I will fearlessly make known the mystery of the gospel"
Posted by Rob Corner at 1:29 am 2 comments:

Today (Saturday) was a day of rest, catching up on washing, reading and packing my bags ready for the trip to Uganda. Well, at least that was for most of the day.

Late in the day I received a phone relaying a message from the people I will be visiting in Uganda. Typical of Africa, the message was a last minute request of new topics that they would like me to preach & teach on in Uganda. WOW! I'm travelling there on Monday. Talk about short notice! I said that I could make no promises but would look try to come up with something.

God is good! For two of the topics that they have requested I have already prepared talks. That leaves me Sunday after church (which goes for hours & is in Swahili) and then Monday during the 12 hour bus trip to work on the last topic.

Please pray for divine guidance & wisdom in preparation and also for safety during the trip.

Posted by Rob Corner at 6:29 am No comments:

The start of my Kenya extension

After 3 weeks with the Kenya Help Mission Awareness Trip team, tonight I farewelled them as most of them (including my wife) headed back to Australia. I'm staying mainly to work with a group in Dagoretti Corner (an area in Nairobi) to help with preparation for the establishment of a new Bible School / Mission.
However, first I'm heading to Uganda for a week to teach, preach and open a new church in a village. I leave for Uganda on Monday. So for now, a quiet weekend of rest and some final preparation.
I aim to blog daily if possible but the week in Uganda is somewhat of a mystery & so I may not have Internet access at all that week.
Stay tuned........
Posted by Rob Corner at 6:58 am No comments:

Please Help to Support my Ongoing Ministry in Kenya